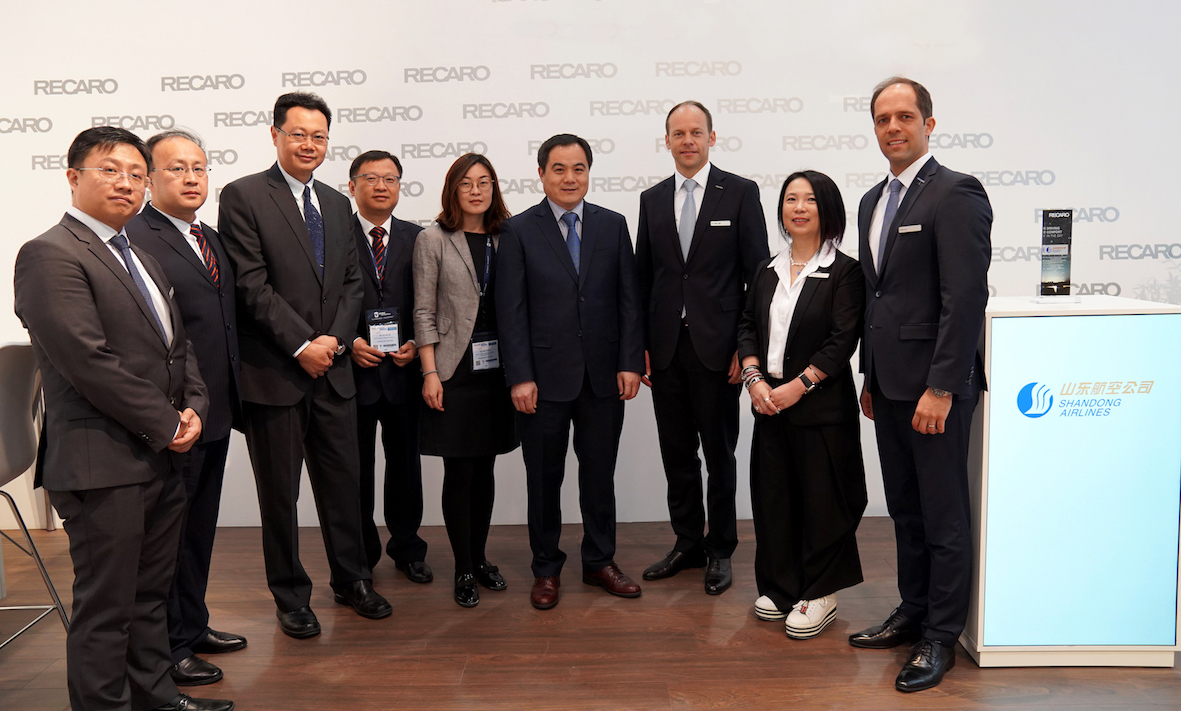 AIX, Hamburg, Germany/Shandong, China, 2 April 2019 – In 2014 Shandong Airlines was the very first airliner to order aircraft seats from Recaro’s production facility in Qingdao, China. Since then, both companies have grown significantly. The joint collaboration also recently led to a first retrofit modification program of 25 Boeing 737NG. To celebrate this joined success and the long-term relationship the top management of Shandong Airlines and Recaro organised a ceremony at AIX in Hamburg today.

“Shandong Airlines and Recaro have experienced many important milestones in the past few years,” says Dr Mark Hiller, CEO and Shareholder of Recaro Aircraft Seating. “We are honored and proud to have Shandong Airlines as our partner and we are grateful for their trust and support. Thanks to Shandong Airlines, Recaro Qingdao has prospered since we set up the site in 2013. It is my honor to welcome Mr. Miao Liubin on our booth today to celebrate this strong partnership. We are looking forward to a bright future for both companies.”

Mr. Miao Liubin, President of Shandong Airlines also expressed the appreciation and recognition to Recaro: “I would like to thank the whole Recaro team for the outstanding products, services and the strong partnership which our teams have developed over the last couple of years. Recaro has been strongly supporting Shandong Airlines´ development and growth. Together we were also pioneers by introducing the concept of premium economy class in China’s single aisle market which has been adapted by several other Chinese carriers afterwards. It has been a great pleasure to see the fast growth of Recaro Aircraft Seating China.”

Shandong Airlines is meanwhile flying more than 10.200 Recaro economy class seats. Recaro’s BL3530 is currently being delivered as economy and premium economy class seat for their new 34 Boeing 737MAX aircraft. The seat is equipped with leather dress covers, USB Power and Recaro’s comfort package in premium economy class. Earlier this year Shandong also placed an order for BL3520 economy class seats to retrofit their existing 25 Boeing 737NGs. While the airliner currently operates 124 Boeing 737 aircrafts, this number is expected to grow to 150 by 2020. Once Shandong Airlines decides to retire the last remaining older models of its Boeing 737 fleet, Recaro will become their sole seat supplier.