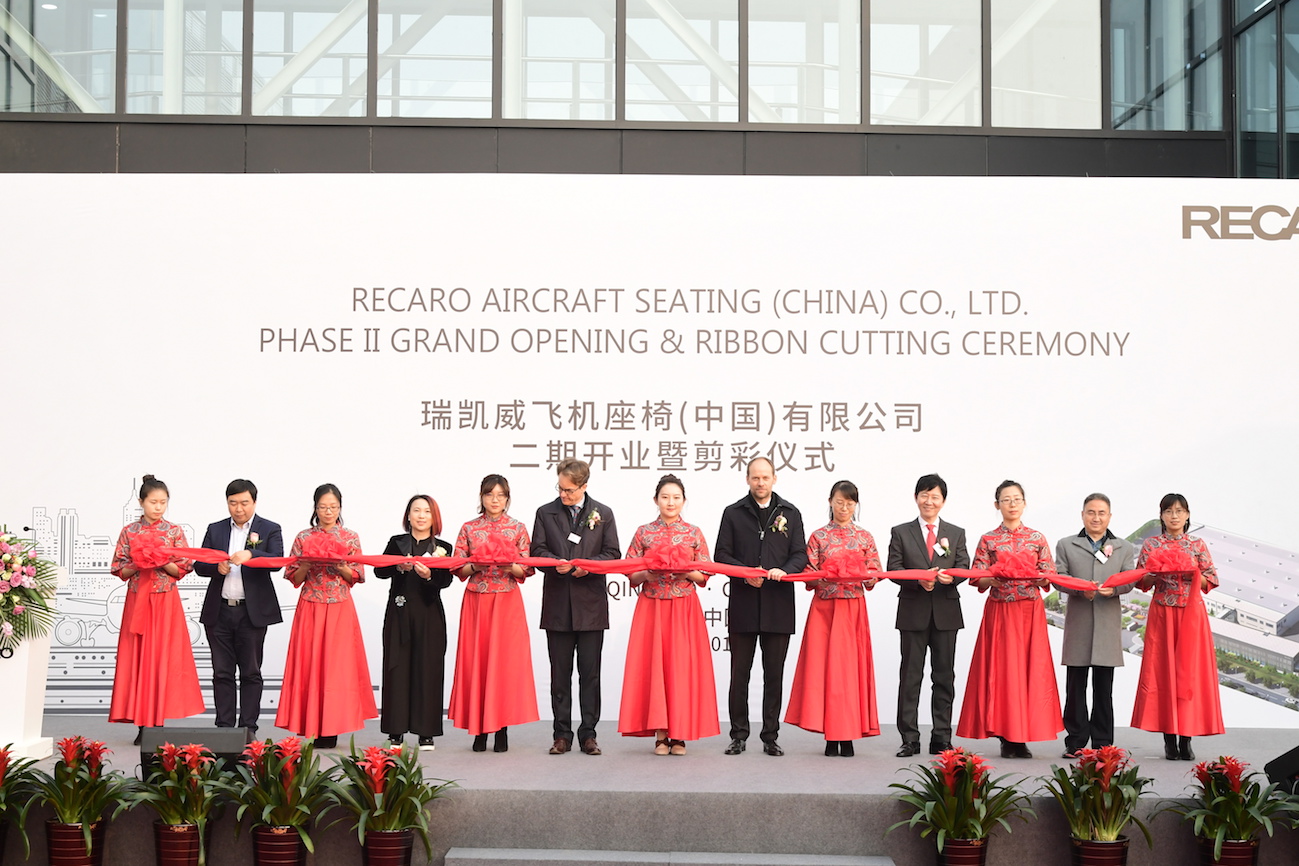 The new Recaro production facilities measures roughly 7,500 square meters. It is provisioned to accommodate up to five new assembly lines which will increase the maximum production capacity of Recaro’s China plant to 60,000 seats per year, readying the company to meet the needs of customers in both the Asia Pacific region and the rest of the world. The investment in the Qingdao plant forms part of the global Recaro space2grow initiative, an ambitious expansion strategy aimed to secure, sustain and expand the company’s growth. Space2grow is a multi-million investment project launched in 2018. Through the acquisition of additional land and investment in new buildings and renovations, it aims to significantly increase the production of Recaro seats across the world as well as office and social space.

The Grand Opening and Ribbon Cutting Ceremony on Monday was hosted by Ms. Irene Tan, General Manager of Recaro Aircraft Seating in Asia Pacific and officiated by Mr. Martin Putsch, Shareholder and CEO of the Recaro Holding and Dr. Mark Hiller, CEO and Shareholder of Recaro Aircraft Seating. Other guests included representatives from airlines, aircraft manufacturers, and business partners, as well as all Recaro staff.

“The new building reflects a clear commitment by Recaro Aircraft Seating to the Chinese market,” said Mr. Martin Putsch, Shareholder and CEO of the Recaro Holding, at the inauguration. “When we chose to set up our plant here and invest in Qingdao, we knew it was the right decision and we are delighted with the support we have received from the High Technology Industrial & Development Zone of Qingdao.”

Dr. Mark Hiller, CEO and Shareholder of Recaro Aircraft Seating: “The plant in Qingdao plays an important role in the international production network of Recaro Aircraft Seating. By increasing its capacity, we will strengthen the entire company in order to realize our vision of driving comfort in the sky.” Dr. Hiller also announced Recaro would continue to invest in the plant to further support ongoing business growth in the Asia Pacific region.

Recaro was the first international aircraft seat manufacturer to set up production facilities in China. It was also one of the early pioneering investors in the High Technology Industrial & Development Zone of Qingdao, a state-level zone approved by the State Council in May of 1992. The zone houses a national-level collegiate science and technology park as well as a state-level software industrial base. Recaro has been operating in Qingdao for more than six years and managed to double its production output three years in a row during that period.

“Recaro Aircraft Seating has been manufacturing very successfully in Qingdao,” says Ms. Irene Tan, General Manager of Recaro Aircraft Seating in Asia Pacific. “Customer feedback has been exceedingly positive, in terms of the quality of seats and our ability to meet delivery deadlines with 100% on-time performance so far. As a result, production volume has increased so much that the site rapidly reached its limits in terms of space. With the new facility in place, we now have the floor to grow even more and service our customers in the region even better for 2020 and beyond.”

The Recaro expansion project in Qingdao held its groundbreaking ceremony in July 2018. The project was managed by MPS Construction Engineering, Shanghai, in close cooperation with its mother company in Stuttgart, Germany.